“The Suite Mintubi” A story about a great parcel

This is a story of a few stones from a truly noble parcel of opal, from their discovery, through the cutting process, and ultimately onto the shelves of a fine jewler. There are pictures and movies along the way, as well as a little commentary…

Arguably more valuable parcels have been found, but a parcel found at Mintubi a few years ago is certainly one of the world’s most spectacular parcels of precious opal.

Mintubi is in South Australia, and has long been known to produce dark to light crystal that surpasses even that of Coober Pedy. It is a relatively small area, and in the past few years has all but been abandoned.

I first saw pieces of it in July of 1994, at the same time when the comet was smashing into Jupiter, and I only remember the opal !

Here is just one of the ‘sisters’.

I was instantly in love, and quickly bought what I could find, and asked for more. In the next year, I managed to capture just a bit more of it.

I’m not sure just how large the parcel was originally, however I did discover that there were only a very few ounces of the ‘tops’ and ‘keystones’. If I didn’t do something soon, they would all be gone. But the price of the tops was astronomical. Even the lowest class stones in this parcel sold for over $5,000US per ounce.

For someone who won’t even buy a new car, this was not an easy decision. But with those lovely sisters sitting there before me, I hardly remember writing the check !

I would dearly love to be an opal miner and be able to find opal like this, but I have spent enough time there to understand that the chance of finding such a parcel is even less than trying to win the Lottery. But as an investor/cutter, I can still find treasures, and the overall cost is still less than that of mining.

And, there is one joy that only the cutter shares. “Finding” the face and giving birth to a fabulous stone.

The cutter faces many dangers. There’s a great chance of destroying the stone, on the wheel, or by failing to see the best face. And there’s always the chance of cutting into a stone only to find that the sand or clay is so thick that only a few specimen stones can be cut. But there is also the possibility of finding a treasure inside that could not have been seen until this cut !

I like to ‘hedge my bets’ by buying what I call ‘butter’. These are stones that are usually large (over one ounce), but always regular in shape or voluptuous. It is obvious that they are very clean and healthy, and that the material is top quality.

With stones like this, I can cut them like ‘butter’. I like to experiment with different ‘peeks’ into a stone, and by the time I’ve found the best orientation, I still have more stone to cut 🙂

The ‘sisters’ were broken naturally into nice sized rectangular pieces. All were remarkably uniform, about 8mm thick and as much as 80mm long, and 40mm wide. Although they showed brilliant green-to-orange fire on the broad sides, when turned to the edge, they make your heart leap !

As with most of the best material, when I first saw the stones, they had already been ‘skinned’ by the miner. With Mintubi material, often there is a very ‘sandy’ clay skin on the broad sides of the stones, and the miner had simply ground most of it off in order to see the broad side color.

In the stones that had been skinned on both sides, you could easily see that the sand did not intrude into the opal matrix and that the base crystal was very dark but clear . When held to the light, they were clean all the way through, and the pattern appeared to be consistent through all of the stones.

Cutting from the edge is very dangerous, because you really can’t see what will happen to the pattern and fire as you literally ‘dig’ in to it. But I have had great luck with this technique, and the material really did look to be consistent.

The shape of the stones were very regular, with no ‘wedgies’, and were almost exactly the same thickness. So if I decided to cut the edges, and it was successful, then I could expect to be able to cut a large ‘suite’ of stones, with matched color, pattern, shape and symmetry. This is something like the ‘Holy Grail’ for opal cutters.

I couldn’t keep my hands off them, and within a couple of months had decided which of the stones I would first cut, and just how. I would cut them into carefully symmetrical ‘slabs’, with the intention of making several ‘matched stones’.

But first, I had to take off some irregular limbs of the stone so as to preserve those pieces and to regularize the ‘slab’ that would be further sliced up.

After cutting the first little piece from the mother, it was obvious that this was indeed the right orientation for this opal.

Here I’ve made one slice to take off the most irregularly shaped end, and of course to peek into the matrix.

Below a QuickTime movie showing the sparkle of the fire and the shape of the first cut sister. 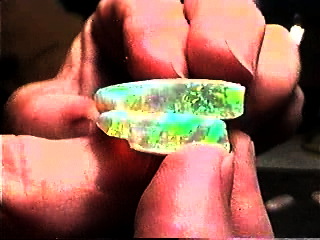 As soon as I was satisfied with these, I created a ‘dummy’ slab from some old boulder, with the exact measurements that I wanted for each opal cut. With this, I made a ‘jig’ of a plate of metal which was mounted parallel to the saw blade, to help me get precise thicknesses with each cut.

It may shock some, but I use a 0.012in. thick saw blade. This may appear a bit thick for such expensive material. But I prefer the thicker blade because it does not ‘wander’. You get a good straight cut, on both sides, and it can be much more economical than if you have to sand off a wavey edge.
One little thing about cutting large stones, is that most often you are cutting right through the best fire. Not only make you heartsick; but the weight loss can be very expensive.

Here they are right after the first sister was completely sliced,

Here is a QuickTime movie which is probably only interesting to those who cut the opal. It is just some ‘background color’.

After cutting two similar but smaller stones, I finally had 9 perfectly matched stones, all of which had the identical 4.5mm height and 6mm width. Seven of these measure within .25mm of 20mm in length, and are within a few hundredths of a carat in weight.
Before I finished, I had cut over 20 stones, totalling more than 150 carats.

This movie is of the ‘top’ sisters, on a turn-table. It is made so that you can make it a ‘loop’, and it looks like it’s continuous. 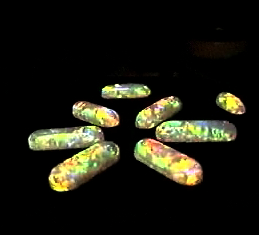 Three of the best were put into the “Morning Sky” ring, along with two slightly shorter stones which afforded the finished ring to have a more slender shape.
But before I let go of any of them, I had to take some pictures of the whole ‘family’.

This movie is of the whole family arranged on a turn table like the movie above.

Where did they go ?

After cutting all of the rough that I would allow myself, I put away the remaining ‘sisters’, with no intention of cutting them further until someone who is struck with their perfection, would want some special stones cut of it. And I get the joy of being able to fondle them often !

Just as I am fussy about buying only the best rough, I believe that the best cut stones deserve the very finest settings.

I work only with one jeweler, who has stores in Palm Beach, and Montreal, on streets with Tiffany’s, VanCleef, and Cartier. He’s a masterful designer, and loves the opal. It wasn’t long before almost all of these were where they should be: set in fine gold and diamonds, and in the best showcases.

The smallest rectangle above was set into a beautiful and very fine ring. 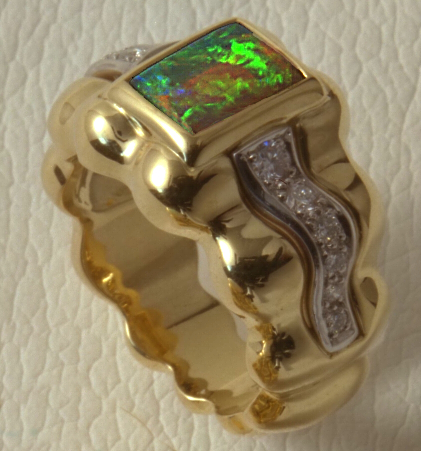 Many have been sold, but most are still waiting. Jewelry of this quality doesn’t sell quickly. But I figure that just about the time that happens, someone will find another great parcel, and I’ll have to start all over again…

You will surely want to save the last two movies to your disk and play them back later. You can change the settings of your QuickTime Player so that these ‘loop’ end to end, not forward and back. There is no audio track, so there’s no reason not to play it with the “Play All Frames” option on. If they appear jerky, do this. They will be slower but just as enjoyable. (Provide your own favorite music)