The ultimate price of the Opal

Above is a picture of a parcel of opal that hasn’t been tumbled, it is just as it came out of the ground apart from 2 stones that are missing.

A few years ago I was on the fields at Coober Pedy with Kent, we were driving out through the 7 and 8 mile fields and he was showing me the work that he had done.

At the 7 mile he showed me where a huge slab had fallen away from the wall, which probably weighed about 20 tonne. He had been with his excavator looking at the wall, his checker Milton was at the face, checking to see if there was any opals in the wall. All of a sudden a huge slab like a big slippery back, slipped off the side of the face of the bulldozer cut. There was one hell of a thud and dust went everywhere. Kent thought quickly and jammed the dipstick of the 40 tonne Komatsu excavator against the falling sandstone, delaying it a split second, there was dust everywhere and Milton was no where to be seen. Finally as the dust settled he saw Milton standing a long way back waving to show that he was still alive. However, the keys from his belt were missing and after an extensive search they were found. That is how close that big slippery back came to killing Milton.

Just after seeing this and the cuts that the pair had done, we came across a man fixing his “blower”. A blower is like a giant vacuum cleaner that sucks the dirt from the shaft out of an opal mine. I knew the man well and stopped to speak with him. He invited Kent and I into his mine, however, Kent wouldn’t go and asked me not to.

Being inquisitive type I went down the mine and saw the biggest ballroom I had ever seen. You could have turned 2 semi trailers around in it. I saw the highest longest drives I had ever seen. I saw the widest drives and as we walked through the mine, the miner directed us to the walls, he didn’t want us walking in the middle because of the danger of slabs falling on us. All along these old drives there were large lumps of sandstone that had fallen away from the roof onto the floor.

If we walked out into the middle one of these may have come down at any time to kill us.

My friend had a theory that in the bottom of these large ballrooms there was still another level containing opal. He said that he wanted to put a machine in there and to operate it from a great distance, so that if the roof fell in it would only fall on the machine and not him.

My friend carried a light hooked up to a generator with what seemed to be hundreds of yards of extension cords. I am telling you if he had left me in there I would still be there, as there were just miles of tunnels. Big open ones and little narrow ones. At some stages we were climbing on our bellies like snakes.

I was amazed that he knew where he was. He eventually stopped and pointed to the wall and said “I got a parcel there last week”. He said that he felt in his mind it was like the Bank of England, both stacked with gems and money that was all his. I said to him “What do think you are doing in here?. It is so dangerous you are going to be killed”. He said “Murray, I need the money”.

And I insisted that the mine would be his undoing and cause his end. He laughed and threw the pick into the wall where he had got his last parcel and we heard clink, yes, there was more opal there.

If you look at the picture at the top of this story and you will see the opal that we found, minus 2 stones.

He then proceeded to dig out the little parcel and wanted to sell it to me before we went up out of the mine. He wanted $500, but it wasn’t worth that, I offered him $350 thinking he wouldn’t take it, but he took it. He and I both knew that it wasn’t even worth the $350. And up we went. Kent was standing at the top of the mine anxiously waiting, he was upset with me and said “what took you so long?” After a few pleasantries we left.

Ten minutes less than 1 week later, my friend was dead. Yes, the roof came in and killed him. Kent was right, I should never had gone into that mine. My friend shouldn’t have worked there.

My friend had 2 daughters and later I gave them each a stone from the last parcel of opal their father mined.

What is opal worth? Look at this parcel and you will see the parcel that cost a man his life. Was it worth it? No doubt he and his friends had been down many dangerous mines. The fact is that there isn’t any mine that isn’t dangerous to some extent. I have a picture of my friend that was taken earlier by an American guest. You can see it in this story.

This sad saga took place a number of years ago. I have a picture of this man in my office. When I think a miner is asking too much for a parcel, I often look at it and think “What is opal worth?”.

It has taken me this long to bring myself to telling this story. There would be hardly a person on the field who couldn’t tell such a story about miners during the past 100 years. They are an exceptional bunch of people. The lure of the stone, drives them on. Not all survive.

“WE SALUTE THE AUSTRALIAN OPAL MINERS” 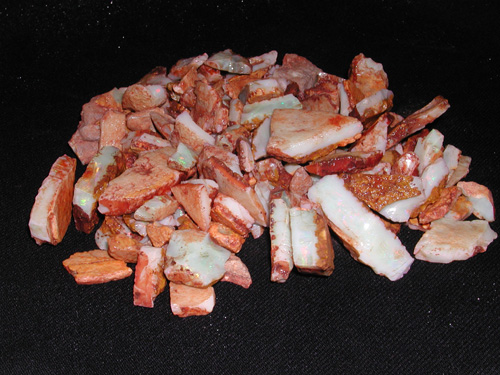 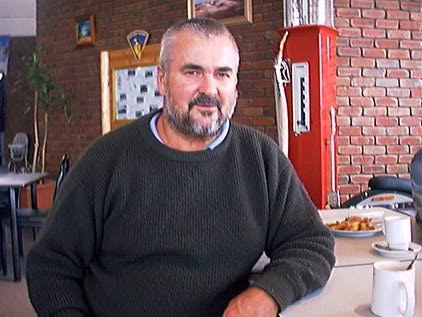